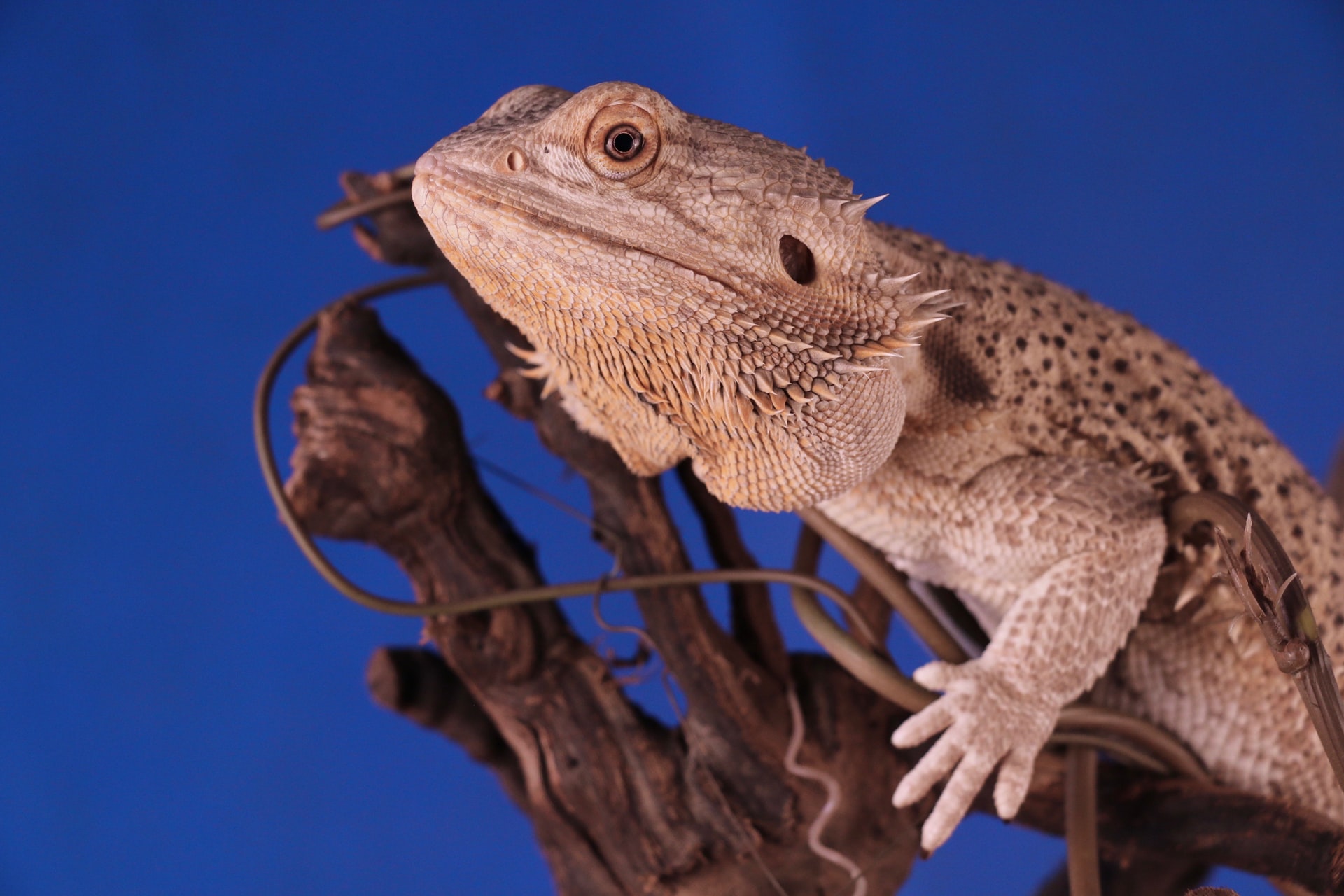 Absolutely! As previously mentioned, the most common recommendation for beginners is to keep a bearded dragon. That’s because there are some aspects of their personality and lifestyle that are easier for newbies to manage, such as their diet, sleep schedule, and habitation. They’re also much more sociable and easily handled, which makes for a terrific pet choice if you like to be hands-on.

Although it is very rare, bearded dragons will sometimes bite people. Usually, this happens when finger feeding your pet since they can associate your fingers with food or smell traces of food on your fingers. To avoid this, you can use special reptile feeding tongs that can be bought at your local pet store. Alternatively, you can wear a pair of clean gardening gloves if you want to keep finger feeding your beardie.

Other than this, the only other times when a bearded dragon may bite you would be when they feel frightened for their lives. If you’ve gotten your pet from a good breeder, treat him or her well, and learn how to detect when it feels anxious, you should be able to avoid being bitten. But even if you suffer a few bites, don’t worry— they’re harmless!

WHERE DO BEARDED DRAGONS COME FROM?

A central bearded dragon in Muloorina, Australia. Photo taken by Graham Winterflood and uploaded to iNaturalist.

Pogona vitticeps, the scientific name for the central bearded dragon, is found naturally in Australia. They’re specifically fond of desert and forest areas around the Eastern and central parts of the continent. However, what’s interesting is that Australia doesn’t legally allow for exporting its wildlife to other countries. This means that any pet bearded dragons being sold legally by breeders in the UK and the US must be born in those countries. Furthermore, this has led some to believe that the original bearded dragons that were first sold and kept for breeding in those countries were smuggled out illegally!

HOW LONG DO BEARDED DRAGONS LIVE?

When kept as a pet, bearded dragon lifespans can vary depending on how well it’s treated by its owner. If you follow the best husbandry practices, it’s possible that your pet beardie can live to be up to 15 years old, give or take a year. On the other hand, a poorly raised bearded dragon will most likely live for around 5 to 8 years. So if you want to keep your beardie around for a long time, make sure you’re taking good care of them!

HOW MUCH DOES A BEARDED DRAGON COST?

HOW BIG ARE BEARDED DRAGONS WHEN THEY HATCH?

HOW BIG DO BEARDED DRAGONS GET?

The vast majority of full-grown bearded dragons will be around 20 to 24 inches long and weigh anywhere from 250 to 700 grams. Much like their lifespan, the size and weight of your bearded dragon will depend on your husbandry; larger enclosures will allow your pet to grow longer, and overfeeding can increase its weight to unhealthy levels. Although rare, some pet bearded dragons have even grown as large as 26 or 28 inches!

HOW BIG OF A TANK DOES A BEARDED DRAGON NEED?

When it comes to setting up the best bearded dragon habitat, your pet’s needs will vary as they age and grow larger. In general, you’re going to want to use a tank made from glass, melamine-coated wood, or animal-safe and heat-resistant plastics such as PVC or ABS. Most bearded dragon owners will stick to a store-bought enclosure specifically designed for keeping reptiles, but some breeders and hardcore herps will make their own.

Keep in mind that the smaller sizes are the bare minimum; the larger sizes are better for your pet!

Sort of! Bearded dragons don’t produce venom in their teeth like cobras, nor do they have toxic saliva like a Komodo dragon. However, bearded dragons do carry a lot of bacteria that can cause Salmonella— both to you and to itself! That’s why it’s so important to wash your hands after handling your pet. Additionally, this is why you should be diligent in cleaning your bearded dragon’s enclosure and bathing your beardie when necessary.

HOW DO I CLEAN A BEARDED DRAGON’S TANK?

The best way to clean a bearded dragon tank requires good habits on a daily and monthly basis. Every day, check for feces and scoop it out of your beardie’s enclosure. Remember to check in corners and under your pet’s hides at least every week for any hidden fecal matter. Also, it’s a good idea to replace your enclosure’s substrate every month if you’re using pellets, paper, or something similarly disposable.

Unless your bearded dragon is incredibly dirty or having a great deal of trouble shedding, you probably don’t need to give it a bath. This is especially true if you have your pet in a clean enclosure that you regularly maintain. That being said, you can bathe your pet as much as once a week if you’re concerned about his or her smell or shedding ability. If you’re wondering how to bathe a bearded dragon, it’s as simple as placing it in a small tub of warm and sterile water — without any soap — and rubbing it with a soft cloth or brush.

Not really! Whether you’re bathing your bearded dragon, filling its water dish, or letting it swim for fun, you want to avoid placing it in any water level higher than its elbows and knees. That’s because they aren’t very mobile in deep water— which makes sense when you consider their natural habitat!

No! Unlike hognose snakes and most other pet reptiles, bearded dragons are actually diurnal. This means that they’re most active during the daytime, which is another reason why they’re so great for beginners. Feel free to play with or feed your pet beardie during the daytime without fear of ruining their sleep cycle or causing undue stress.

Definitely! Although they aren’t the smartest reptiles, bearded dragons are surprisingly astute. That’s a big reason why they get along so well with each other in captivity (to an extent), and it’s why they get along so well with us! In fact, a scientific study from the University of Lincoln found that bearded dragons possess the ability to learn by imitating each other, which is a rare characteristic in the animal kingdom.

HOW DO I DETERMINE A BEARDED DRAGON’S GENDER?

Here’s how to tell the gender of a bearded dragon: ask a vet! If you don’t want to do that, there are some other ways for you to tell. It’s going to be difficult to determine the gender of a baby bearded dragon due to their size, but some male beardies have thicker tails and wider heads than females. Other than that, your best bet is to wait until your pet is older and look between his/her hind legs for either two bumps (male) or one bump and a slit (female).

HOW DO I CUT A BEARDED DRAGON’S NAILS?

For most first-time beardie owners, you’re better off taking your pet to the vet if you want to trim his or her nails. In fact, a well-stocked enclosure that contains rough terrain and climbable objects will often ensure that your pet’s nails are always at a good level. But if you must know how to cut bearded dragon nails, you should use a special claw trimmer designed for small animals that can be bought online or at your local pet store. Be sure to trim your beardie’s nails in a well-lit environment and when it’s in a calm state; otherwise, you can trim his or her nails too far and hurt it.

HOW DO I PLAY WITH A BEARDED DRAGON?

Bearded dragons are a lot more friendly and sociable than other reptiles, provided that it’s a captive-raised creature that’s being treated well. If your pet beardie is energetic but not anxious, there’s no harm in some gentle playtime! Some common activities people like to engage in with their bearded dragons include holding them, taking them for short walks with a special leash, or letting them push around a ball.

WHAT CAN BEARDED DRAGONS EAT?

Bearded dragons are omnivores, which is yet another feature that makes them distinct from many other pet reptiles. This means that a balanced bearded dragon diet should consist of fruits, veggies, and insects or lean meat. We recommend our 50/50 Omnivore Blend with blended quail eggs, but you can see some additional suggestions on what to feed bearded dragons here.

HOW OFTEN DO YOU FEED A BEARDED DRAGON?

Generally speaking, it’s a good idea to always have fresh veggies and some fruit in your beardie’s terrarium for it to eat whenever it’s hungry. When it comes to baby bearded dragons, we recommend feeding them insects around 3 times a day. On the other hand, full grown bearded dragons only need to be fed once a day. 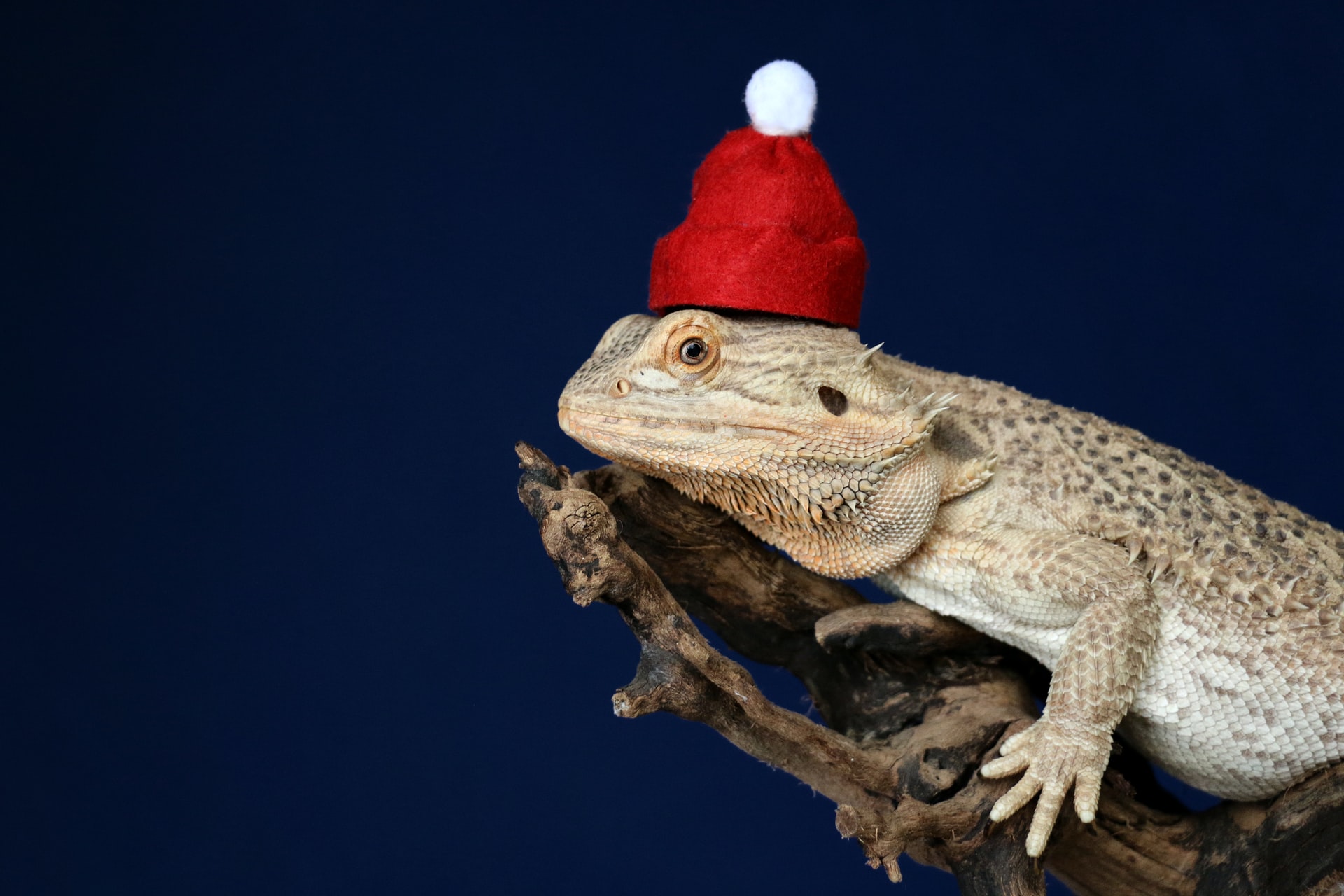