Decentralized finance (DeFi), a new investment mechanism exploded into the financial sector and certainly has been the trend to watch in the digital assets industry.

With billions of dollars in value circulating on public blockchains, has only been a matter of time for digital assets to enter the field of generating yield through on-chain banking and financial systems.

Different financial products from borrowing and lending to derivatives have made their way into the blockchain finance industry, driven the last few months by this experimental trend to provide traditional financial instruments into the sector.   The movement is largely enabled by Ethereum blockchain as it offers the interoperability needed for different money legos to interact with each other.

The governance of these new money protocols has been a major concern, which introduced the idea of governance tokens, usually generated through Yield Farming approaches.

DeFi platforms open up a whole range of new ways and business opportunities, and yield farming has become the cornerstone concept for DeFi in 2020. The craze started with Compound’s COMP governance token, which was the first to initialize this investment mechanism. On June 15, Compound distributed its governance token on top of earning the usual cryptocurrency interest. This concept, as it seemed quite lucrative and effective, quickly spread to other applications, creating a yield farming and liquidity mining hype.

As a concept, yield farming or liquidity mining is a fresh way for users to earn passive income in the DeFi ecosystem. Cryptocurrency farming consists of staking crypto-assets on a certain platform in exchange for a return on investment. The trusted platform is then responsible for generating profits and returning it to its stakeholders.

The primary mission is to generate governance or reward tokens to whoever participates in the protocol that implements this system:

The goal for any application is to generate greater liquidity. Thus, the money invested is transformed into an investment and a generator of rewards. Unfortunately, the intensity of the yield farming activity distorts the value of associated crypto-assets, in which the demand is higher. It remains a fragile mechanism for now, and it involves a lot of risk for investors. Platforms can be attacked, and the value of assets is highly volatile as there are always new protocols appearing to compete with the most promising initiatives. 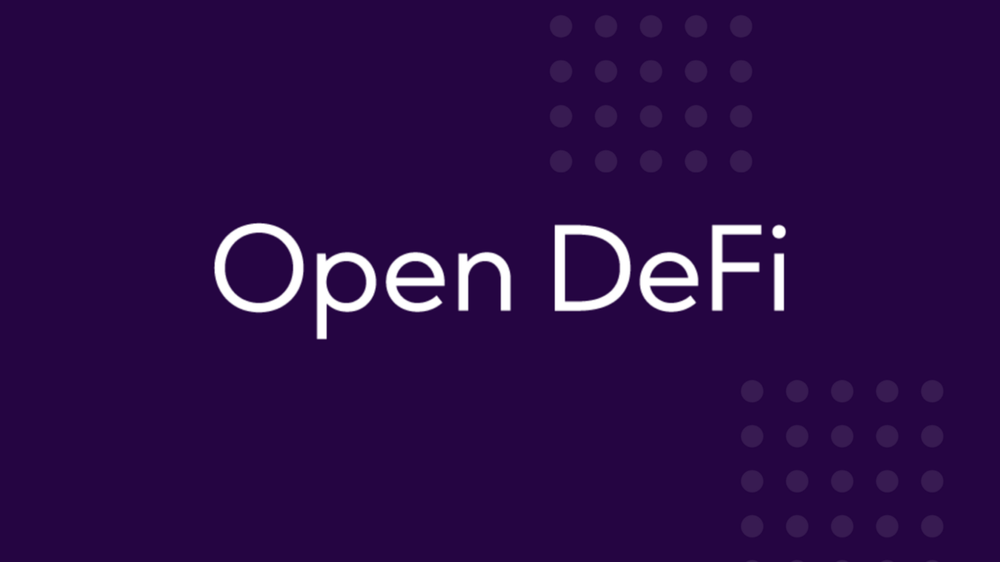 Nonetheless, yield farming is promised to become the silver lining of the DeFi universe, expanding the industry and drawing in financial capital and new players to the field. As DeFi is growing in popularity, more and more financial services companies want to embrace blockchain and shift from their conventional finance setups to a decentralized ecosystem.

DeFi isn’t fully decentralized yet, with many of the major platforms and projects beginning with core teams who control their initial development. This is progressively changing with the rapid ascent of governance tokens as a means of decentralization.

Governance tokens have become an essential part of DeFi applications. It enables new projects to achieve a higher level of decentralization. Most governance tokens function like shareholder votes, allowing investors to influence the project development roadmap and operational decisions.

A recent report highlighted that many projects, especially those with strong venture capital roots, remain highly centralized. Analyzing projects such as MakerDAO and Compound, the research found that the voting process appears to be controlled primarily by large holders, as the top 20 addresses hold about 24% (MKR) and a staggering 68% (COMP), respectively, of the total supply. 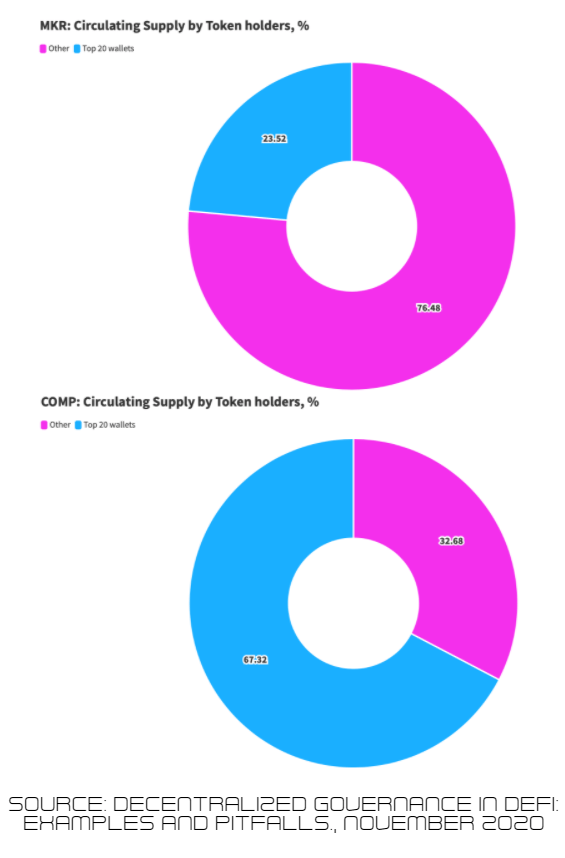 It’s important to look at the owners of the majority of tokens and the way they are managed. For example, having multisig wallets on the core holdings and value locked in smart contracts helps to show the founders’ willingness to work on the project for an extended period of time.

An example of potential issues has been observed already with the first governance vote for the leading decentralized exchange Uniswap. The vote took place around a proposal seeking to reduce the number of tokens needed to submit and pass proposals. It was put forward by open-source lending protocol and major UNI token holder, Dharma.

This has ended in rejection, despite the proposal attracting overwhelming support of 98% of votes cast. It fell roughly 1% short of the 40 million vote threshold needed for approval by the close of voting. If approved, the overall community could have been governed by its two major investors, reducing significantly the effectiveness of its decentralization.

In line with yield farming, the demand for Ethereum-based stablecoins exploded during the recent DeFi euphoria, with Dai’s supply growing by more than 600% and USDC expanding 200%. Starting July with a market cap of nearly $130 million, Dai’s supply has since expanded to around $1 billion.

Dai is created when Ether holders deposit their ETH into the MakerDAO protocol, allowing them to create the stablecoin and using Ether as collateral. As an ERC-20 token, Dai can then be used on the Ethereum network to generate yield using DeFi protocols.

Demand for Circle’s USD Coin (USDC) similarly exploded in the third quarter, with USDC’s market cap tripling from $928 million on July 1 to $2.79 billion today. USDC is the second stablecoin to grow by more than $1 billion in a single quarter, after Tether (USDT).

The capitalization of the combined stablecoin sector grew by $8.2 billion in Q3 — more than that of the previous four quarters combined. Of the sector’s $20 billion capitalization, 75% has been issued on Ethereum.

Within this context, many different DeFi consortiums were founded in the last few months, with Ren and Polychain Capital launching the Ren Alliance in March, and TD Ameritrade and Cumberland DRW revealing the Chicago DeFi Alliance in April.

The Open DeFi Alliance initiative has announced the launch of a western arm and onboarding of eight new member firms. The alliance seeks to unite leaders of the DeFi sector by forming a global cooperative consortium focused on innovation, risk management, and liquidity strategies,

Nyctale is glad to be indirectly linked with this initiative, through our lead investor Outlier Ventures.

Q&A With Poly Hacker, Hero Or Villain Behind DeFi Heist?